Please join us Friday, May 8, for our latest virtual artist talk. We’ll be sitting down with Crucible faculty member, Lara Hopwood, of our Fire and Performance Department. Lara has been leading fire performance classes at The Crucible and inspiring audiences around the Bay Area with her flaming performances for over a decade.

This event is part of a series of virtual artist talks The Crucible will be hosting during our Covid-19 related closure. Please check back for information on future talks! Hopwood began her fire performance career when she took her first class at The Crucible in January 2008. She’d previously been trained in color guard making her transition to fire performance a natural next step. Since then, she’s become an integral part of the Fire and Performance faculty, serving as department head from 2009-2017, teaching dozens of sessions of Art of Fire Dancing I (Poi) over the years, and regularly performing at Crucible Open Houses and other public events.

Outside The Crucible, Hopwood has experience performing in independent productions and private parties. She was a fire performer in the 2009 Burning Man Fire Conclave and was featured in Intrinsic Self, an award-winning documentary about fire performance art created for the Seven Day Film Festival. Hopwood also performed with fellow Crucible faculty and community members at Oakland Museum’s Burning Man Block Party last fall as part of their No Spectators: The Art Of Burning Man exhibition.

Watch The Artist In Action:

Crucible members traditionally receive complimentary or discounted tickets for Artist Talks throughout the year. During this time of isolation, The Crucible is making all Virtual Artist Talks available to everyone in our community, so that regardless of a person’s financial situation, we can all gather in celebration of something we all love—the arts.

Visit the pages below to register for upcoming talks or watch the Virtual Artist Talks you may have missed. Please join us Friday, June 5, for our next virtual artist talk with Crucible faculty member, Rob Nehring, of our Welding Department. Rob has been a part of The Crucible community... Please join us Friday, May 22 for our next virtual artist talk. We’ll be speaking with Nico Chen, writer, photographer, and critical learning scientist focused on reimagining... During this Virtual Artist Talk, Oakland artist and fire performer, Lara Hopwood will discuss her early introduction to fire dance, how she goes about planning a fire performance,... During this Virtual Artist Talk, Oakland artist and founder of Rocket Glass Works, Sam Schumacher will discuss the inspiration behind his glass work.... Please join us this Friday for a virtual artist talk with Oakland artist, Rosa Dorantes, an accomplished ceramist with over twenty years of experience. Since Rosa became The... Please join us this Friday for a virtual artist talk with Oakland artist, Karen Smith. We'll discuss her philosophy on art-making, how it influences her artistry and metalwork, and... 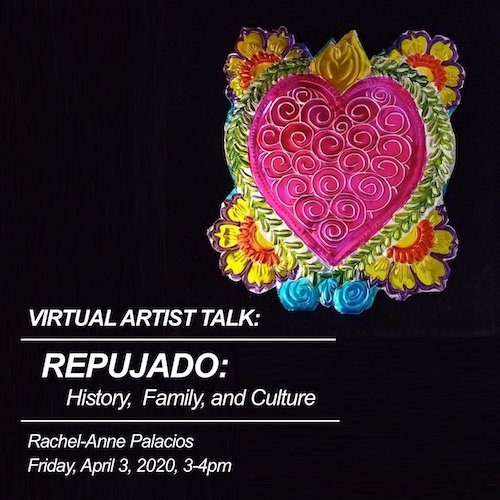 Join The Crucible for our first-ever virtual artist talk with Oakland repujado artist, Rachel-Anne Palacios. We'll discuss her metal embossing practice and how her work reflects...