The Art Of Enameling: Learn Different Types & Techniques for Enameling

Enameling is one of the oldest forms of working with both glass and metal to create color and pattern on the surface of jewelry, wall work, and sculptures. It is an invaluable industrial process to coat steel for practical uses in appliances, cookware, and signage.

Enameling is a process by which powdered glass is fused to a metal substrate at high heat. Enamels can be applied to glass, ceramics, and most commonly, metals. The application of enamels can add color to metals such as copper, silver, and gold. The powdered glass can be applied either wet or dry to a surface. The enamel melts, flows, and fuses to the surface in a smooth coating when heat is applied. Firing temperatures using a torch or a kiln generally range between 1400 and 1,650 degrees Fahrenheit. The way that you fire your enamels will have a distinct effect on the texture and color of the enamel design, therefore enamelist must take many different variables into consideration before firing their piece. Enamel is composed of inorganic pigments and additives that each have various properties of opacity, translucent, and transparency. That composition will determine how the enamel is fired.

What is enameling used for?

Enameling is an ancient process and widely adopted technology that has been used for thousands of years, dating back to the 6th century B.C. Throughout history, enameling was used to add color in place of precious stones in ceremonial objects. Artisans used enameling to decorate religious and ceremonial objects during the rise of the Holy Roman Empire and Byzantium. The Golden Age of enameling was during the Middle Ages and the Renaissance, especially in Limoges, France. It was during this time that enamel painting techniques were first used. Many of the enameling techniques enamelists use today have French names such as Cloisonné, Grisaille, Champlevé, and Basse Taille, all dating from this period in France.

Enamel technology has paralleled the development of glass technology throughout the world. Over time, the medium became more affordable and easier to use. In the 1700s, enamel was used to decorate objects such as clocks, fans, and binoculars. In the 1800s, industrial enameling was developed to coat steel to keep it from rusting. Today’s enameling is everything from decorative use, fine art, and industrial use. The technique you choose to use when enameling depends on the final desired result. There are at least 200 different techniques to choose from when you start enameling. Certain methods emphasize broad-spectrum applications like sieving powder to create a one-color coat on a piece of copper, and others are much more detail and labor-oriented.

When practicing cloisonné enameling, the enamelist fills small wire enclosures with wetted enamel particles, then fires. It is one of the earliest enameling techniques and is derived from the French word meaning “cell.” Early cloisonné enameling examples go as far back as 600 B.C.

Originally used as an underpainting for oil painting, grisaille enameling achieves a dramatic effect of light and shade. Often associated with medieval French enameling, grisaille is the application of white enamel to a black enamel background, creating halftones and shading. The word ‘grisaille’ means grey. 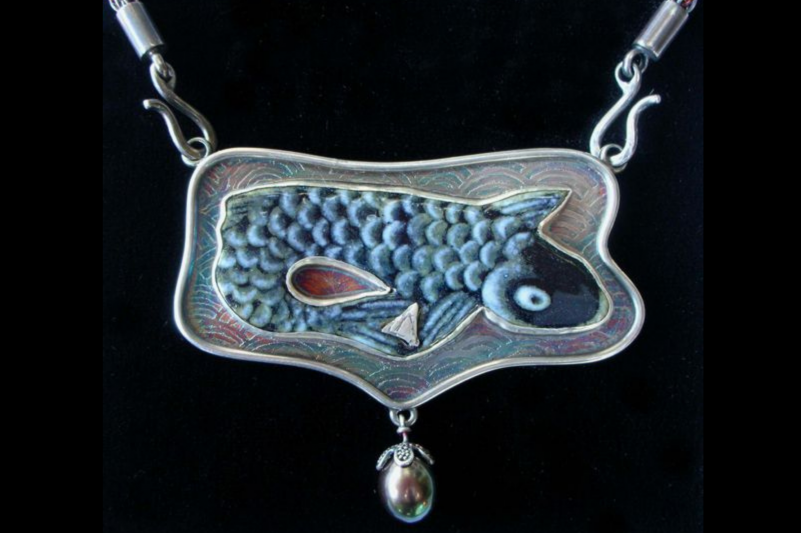 Champlevé is a technique where the metal’s surface is embossed by hammering, stamping, or carving to form depressions in which enamel is applied. The original metal remains exposed and is not enameled. After the piece is fired, the enamel builds up in these divots and the result is a mostly smooth surface. The name comes from the French word for “raised field.”

Limoges enamel is the most common type of painted enamel. While Limoges gets its name from a city in France, it has been used in several countries as a way to work the enamel into fine paintings.

Plique-à-jour is a vitreous enameling technique where the enamel is applied into cells made of gold or silver wire, similar to cloisonné, but with no metal backing, so that light can shine through the enamel. The result is a beautiful stained-glass effect. Plique-à-jour comes from the French word for “letting in daylight.” Experimental techniques are increasing, thanks to more accessible information on the internet and sharing on social media. The Crucible teaches an experimental enameling class using methods from Fred Ball, a prominent modern enamelist. While people have been experimenting with enameling for thousands of years, Fred Ball wrote a groundbreaking book in the 1970s, synthesizing many techniques. Since publishing “Experimental Techniques in Enameling,” Ball inspired people all over the world to experiment with enamels. Specific techniques include anything from enamel decals to silk screening. Experimental enamelists may also play with different firing techniques, such as torch firing versus kiln firing or combining the two.

There are many practical enameling applications likely found throughout your home, from the kitchen to your bathroom. From a practical standpoint, enameling is a quality method of strengthening materials and preventing metals from rusting. Occasionally, enameling is used inside of water heaters as a protective barrier in the inner tanks. This makes the plumbing resistant to high temperatures, highly resistant to rust, and lowers the chance of inner tank leakage. Cast iron enameled bathtubs and sinks are also enameled to prevent rust and can last hundreds of years. In your kitchen, you may own enameled plate ware, mugs, and cookware. Some of the most popular modern cookware is the cast iron enameled products made by Le Creuset. Steel whiteboards and chalkboards are also enameled. 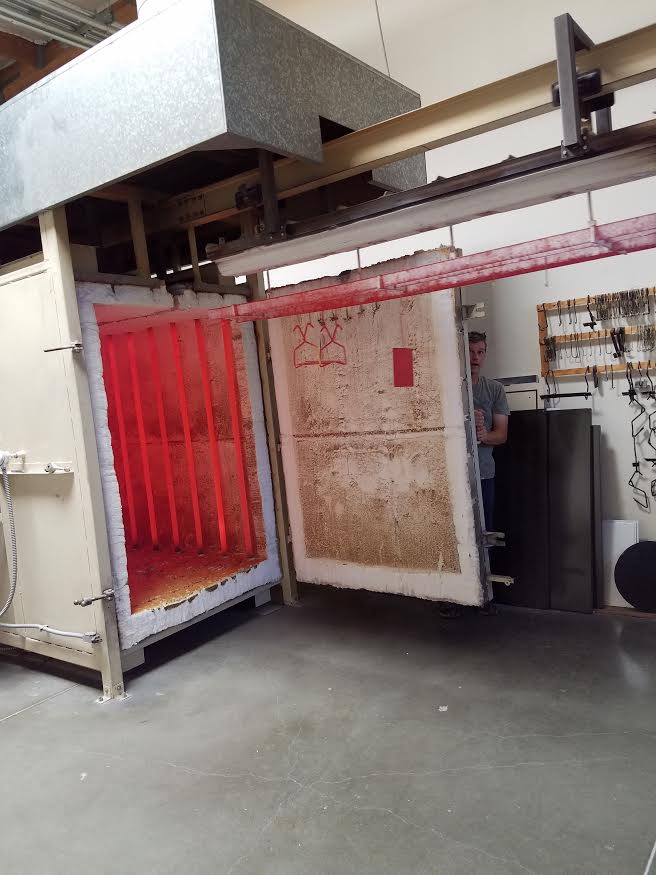 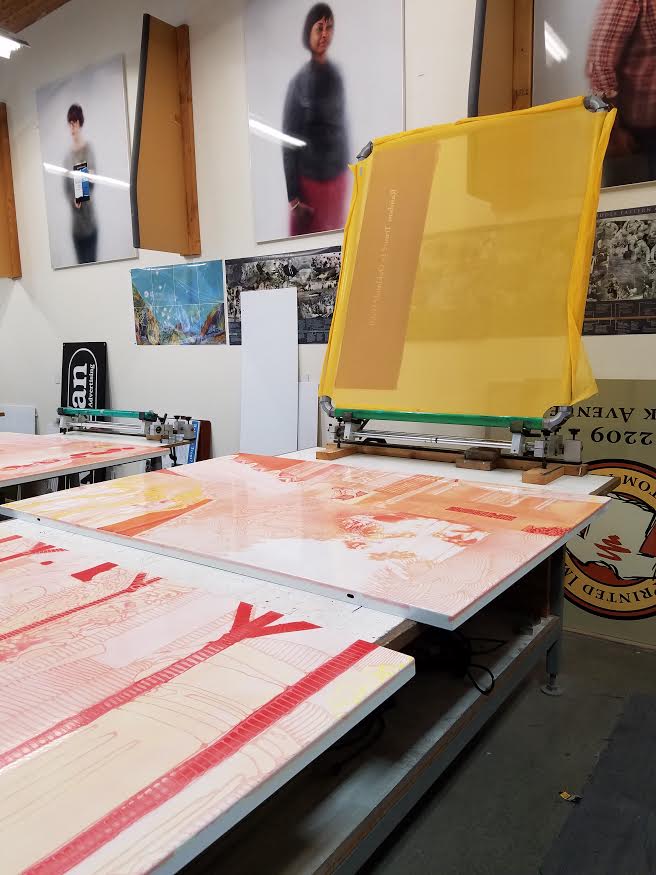 How to learn enameling

In The Crucible’s Enameling Department, we teach both traditional and experimental application techniques to various types of metals. You can learn to make objects ranging from fine cloisonné jewelry to large-scale steel sculptures and wall pieces. Our well-equipped studio features everything you need to learn the basics of enameling, and then take it to the next level.

You can start your enameling journey by doing some online research. Rio Grande has great step-by-step resources on equipment and techniques, and the Gemological Institute of America (GIA) offers great explanations on different enameling techniques. The Enamelist Society, the only national enamel organization, hosts biennial exhibitions and conferences and produces weekly online educational talks. What metals can you enamel?

Only certain metals and alloys will fuse with enamels. Copper, silver, gold, and various low or no-carbon steels are all examples of metals that work well. As technology increases, there is more opportunity to expand the use of enamel to other metals.

How do I do metal enameling?

Enamels are applied by sifting dry particles onto the surface of your metal or to previous enameled layers. Enamel powder can be wetted and used to fill depressions (champlevé) or enclosures (cloisonné). This technique is sometimes called wet packing.

A piece of metal can be enameled on both sides. If there is an enameled backside it is called “counter enamel.” Counter enameling is encouraged to keep pieces from cracking under the stresses of heating and cooling.

For kiln firing, an average firing temperature is between 1450 to 1500 degrees Fahrenheit. Because of the heat coming from a kiln when the kiln door is opened, enamelists must wear protective gloves and glasses. An average firing time for most enameled pieces is two to three minutes. Unlike other kiln firing media such as ceramics or glass where the pieces are put into a kiln cold and taken out cold after firing, an enameled piece is put in the kiln hot and taken out hot. Torch firing enamel allows the student to see the changes that the enamel goes through as it is fired. Only very small pieces can be torch fired. 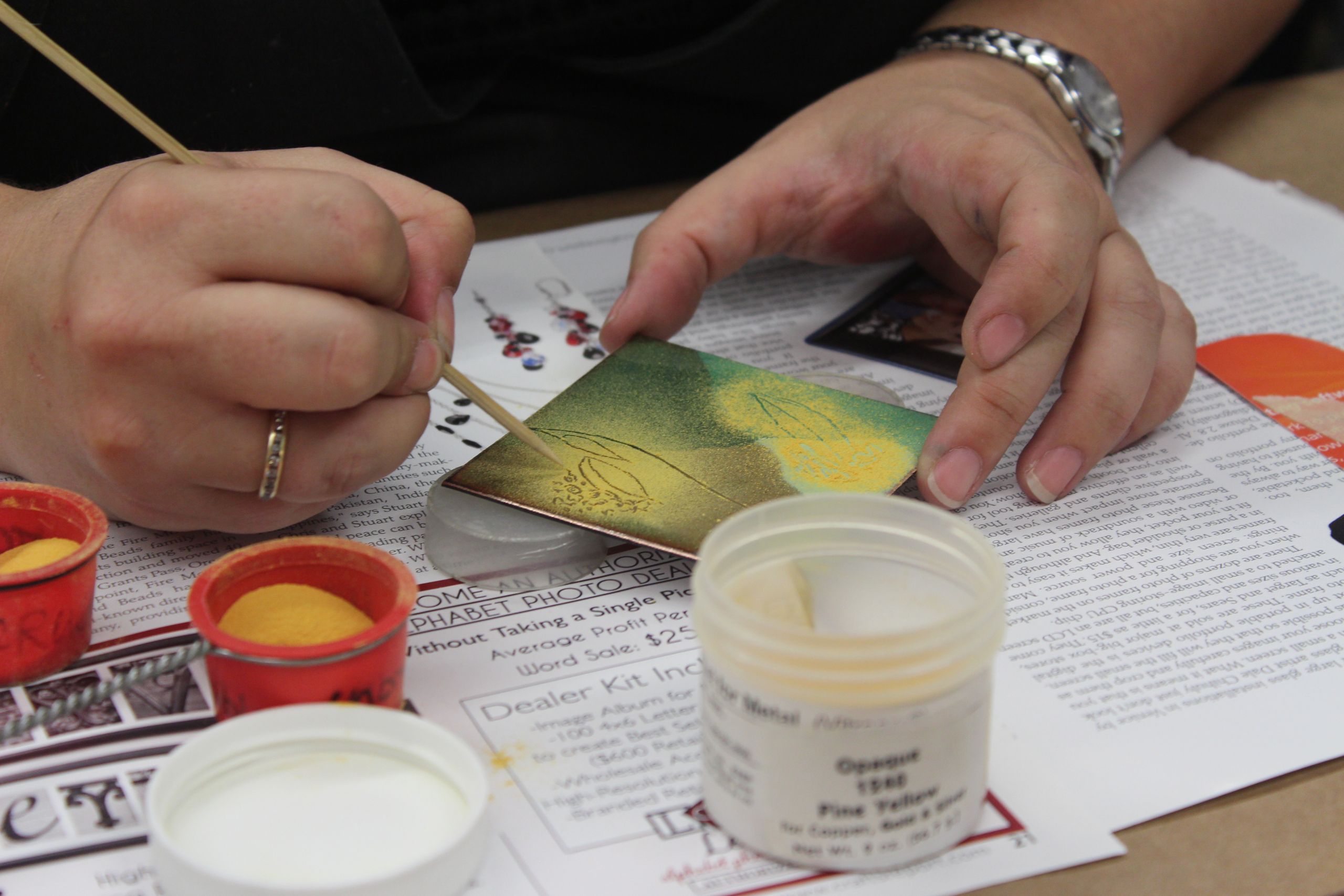 What is enameling jewelry?

Making jewelry is a common application of enameling to create smaller, ornate objects, especially since most people own kilns that have very small interior openings. From the beginning of its use, enameling offered a way to feature vibrant color and preciousness in jewelry. Enamel powder comes in different colors or is clear. Its initial color does not ultimately represent the vivid colors resulting from the fusion process.

Are porcelain and enamel the same thing? 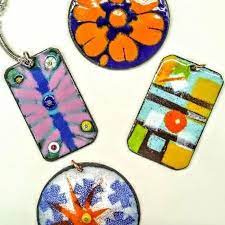 Learn the essential common enameling techniques, how to start, and what you create with enameling, from jewelry to bathtubs!... 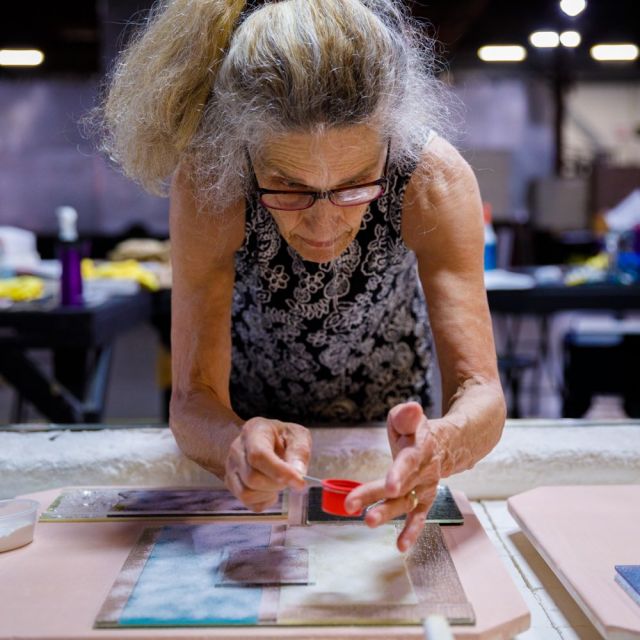 Learn exactly what tools and supplies you need to start fusing glass. Get the inside scoop from our Glass Fusing & Slumping Department.... 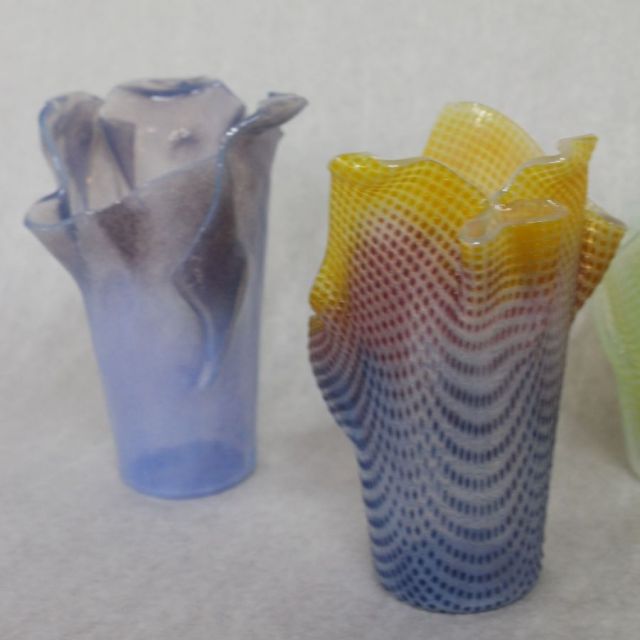 Guide to Glass Slumping: How to Slump Glass in 5 Steps

Learn exactly what tools and supplies you need to start slumping glass. Get the inside scoop from our Glass Fusing & Slumping Department.... 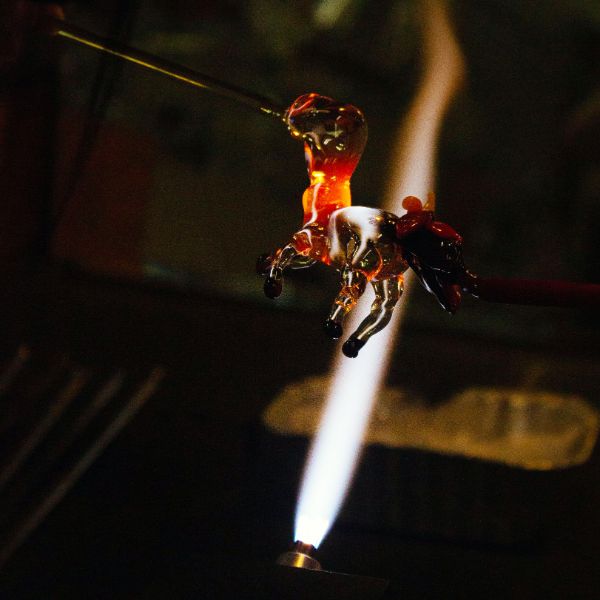 Learn exactly what tools and supplies you need to start lampworking. Get the inside scoop on our Flameworking Department's favorite tools.... Learn exactly what tools and supplies you need to start lampworking. Get the inside scoop on our Flameworking Department's favorite tools....

You Can Learn To Enamel

Discover the ancient art of fusing glass to metal. You will learn techniques in metal preparation and fabrication for enameling, kiln properties and firing methods, properties of...